Our Village's Own Railway

Coal mining had started in the 18th Century although only on a very small scale until the early 19th C. Even at the height of production this was a small mine; in 1928 30 men were working underground..  Early ownership of the mine is not recorded although by the mid 19th Century both the mine and a local limekiln were owned by Mr Boothman of Bothams Hall.  By the 1860's Mr West was the owner followed by Levi and Elijah Hall.  Two seams of coal were mined known as the White Ash and the Red Ash. The former also contained large quantities of fireclay and in 1890 it was decided to exploit this by establishing the Furness Vale Brick and Tile Works.  ( The Ordnance Survey map of 1899 shows and earlier brickworks further along Buxton Road; opposite the track leading to Carr Farm).  Both the colliery and brickworks were purchased by Richard Knowles in 1905.  From that time, coal was usually produced only for firing the kilns, most of the output being clay.  The colliery suffered increasing problems with water and eventually the quality of the clay was diminishing. The mine finally closed in July 1963.


In common with most mines, Furness Clough was served by a narrow gauge railway; the flanged tubs being hauled  by pit pony.  The tramway at Furness was to a gauge of 19 inches and reached the surface at a gradient of 1 in 6.  The tracks continued through the clough towards the village and descended steeply alongside Williamson's greengrocer and chip shop in order to tunnel under Buxton Road. The line passed under the small building opposite and which is the present day "chippy".  A bridge carried the Buxton railway line over the tramway and adjoining footpath.  Immediately after the bridge a short spur branched sharply to the left to serve Knowles standard gauge private siding. Here finished products from the brickworks such as fire backs were loaded on to main line wagons.  At times fire clay was brought in, presumably to suppliment the output from the mine. The main route of the tramway continued just a short way further to the canal wharf.  Here it turned to the left to terminate alongside the water.  The dock was spanned by a small stone warehouse which by 1960 had become  derelict and roofless.  The building had at one time been occupied by Mr Fox, boatbuilder and painter of Whaley Bridge. Today a larger boatshed has replaced it and is still used for painting canal boats.

The tramway existed in Furness Clough for over 150 years.

John Farey (1766 - 1826) was a noted geologist and a prolific writer. His book "A general view of the agriculture and minerals of Derbyshire " was published in 1811.  Farey wrote about a railway branch which proceded under the turnpike road, 1 mile to Diglee Colliery.  There were tipplers on the canal wharf for loading carts as well as boats with coal .  There is also reference to Jow-hole old furnace being near to the start of the tramway.

The Peak Forest Canal opened in 1796 and the Turnpike in 1804.  It seems likely therefore, that the tramway was constructed between these dates.

In its later years the tramway was cable hauled. Rod Stevenson describes a hut near the brickworks office which housed a ship's winch powered by electricity. This ran the cable which hauled the tramway wagons.
The precise date of removal of the tramway is not yet established although it appears to have been around about 1960.
___________________________

The colliery was entered through an adit in Furness Clough which was enclosed by a stone building and nearby was  an earlier shaft.  The computer reconstruction below illustrates this.  From the mine entrance a path led up to the field below Heatherby on Diglee Road and this is where the ponies were grazed and stabled. Bungalows now stand on the site of this field. 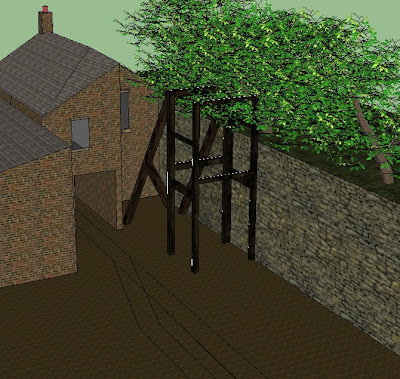 There is very little evidence of the mine today.  The photograph below shows the site of the adit. 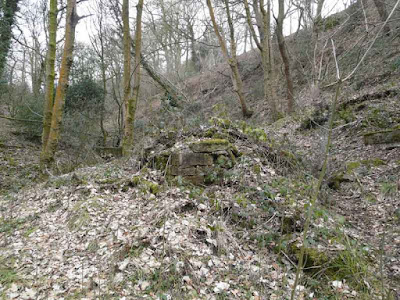 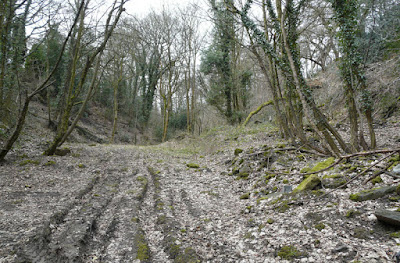 Above, the view from the brickworks looking towards the mine adit. 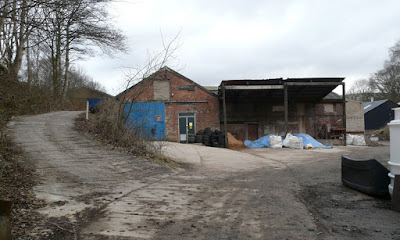 The brickworks in 2010 seen from the Clough. The tramway ran to the left of these buildings. 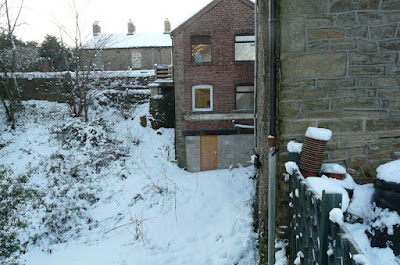 The rear of the Fish and Chip shop at 53 Buxton Road in 2010. The bricked up lower floor shows where the tramway ran beneath the building. 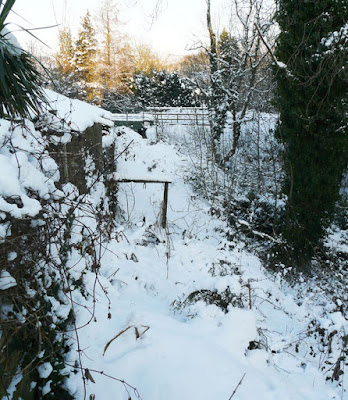 The route of the tramway viewed from Buxton Road in 2010. The wooden gantry spanned the tracks. The iron bracket beneath the beam carried the haulage cable. 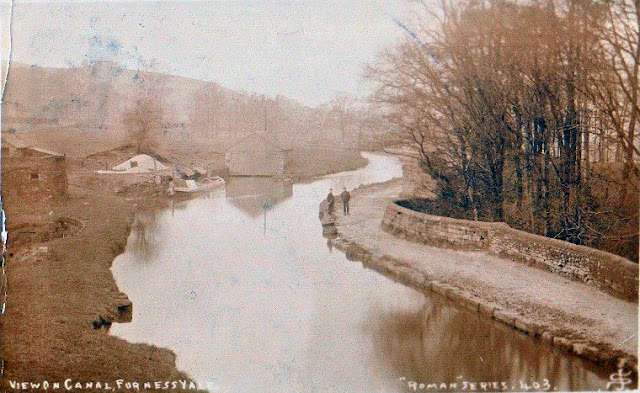 This photograph, courtesy of Chris Simpson shows the canal wharf in 1907. The narrowboat is partly laden, perhaps with coal from Furness Clough. There are three tipplers alongside the boat to facilitate loading from the tramway wagons. The white heap is possibly limestone for there was a lime kiln at the brickyard site. The curved line in front of the limestone is probably the tramway track.

Ordnance Survey maps below show the route of the tramway. The branch to the standard gauge siding is not shown. 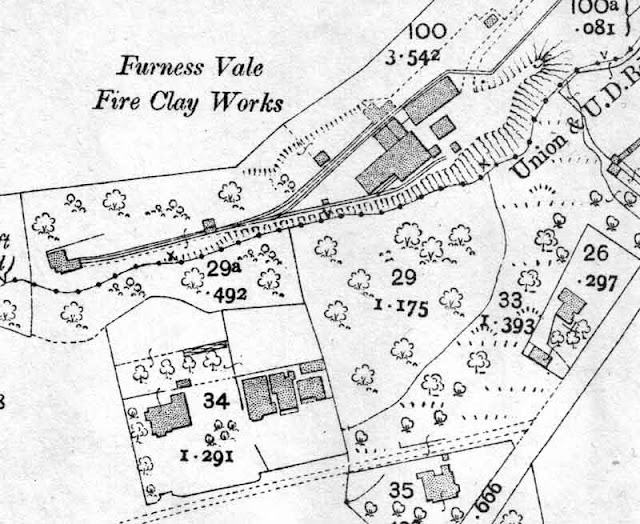 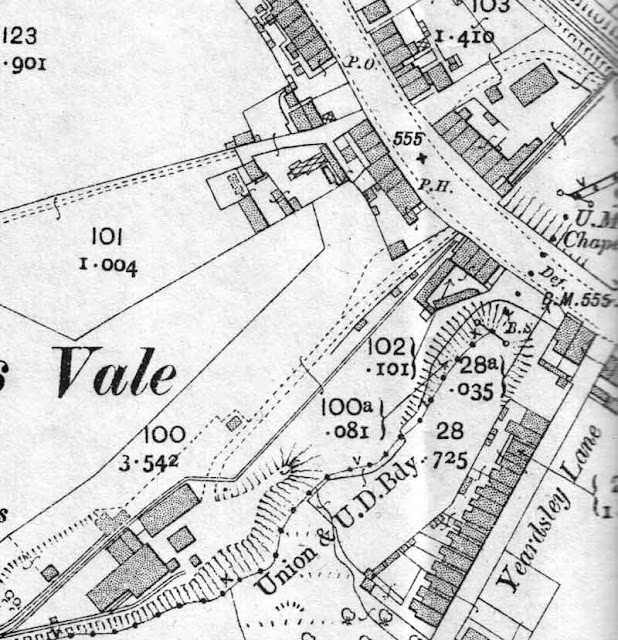 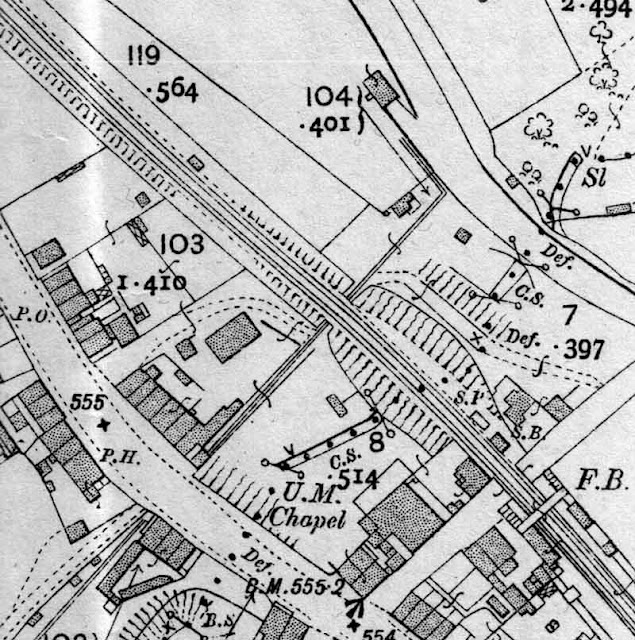 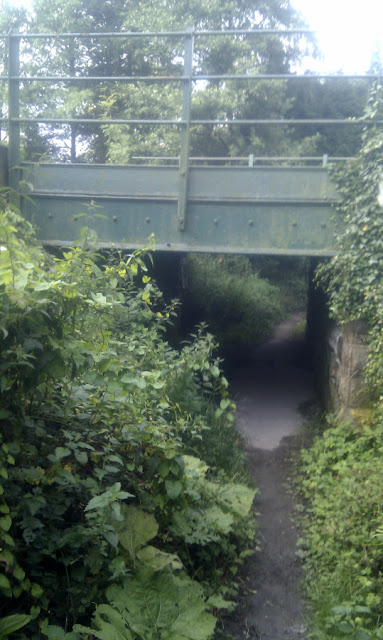 Bridge 32, a photograph by Jack Hardman

In latter days at least, bridge 32 shared it's space between tramway and footpath.  There was a corrugated full height partition separating the two.  The footpath runs from the end of Old Road which is a short cul de sac. Before the building of the railway Old Road had continued downhill to join what is now Station Road. 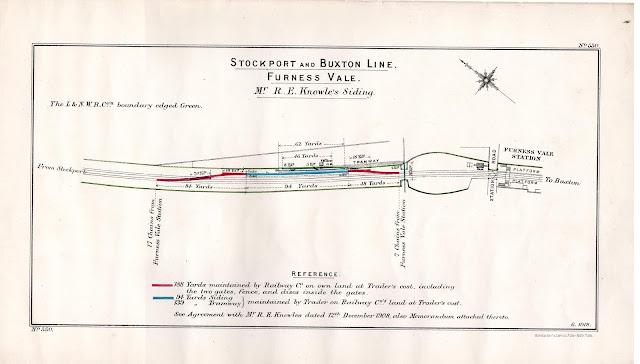 If you have enjoyed visiting this web site, you may wish to help the History Society by a financial contribution. Donations, small or large, are always appreciated.

Furness Vale Local History Society
Furness Vale, Derbyshire, United Kingdom
We research and record Furness Vale's past. An archive of documents, maps and photographs is maintained by Chairman George Tomlinson, a product of many years research. We hold meetings on the first Tuesday of each month except July and August. A guest speaker usually presents an illustrated talk of local or regional interest. Membership is available at an annual fee of £5. For further information contact David Easton 01663 744080 furnesshistory@gmail.com

A selection of our publications may now be ordered online. Follow this link to the online shop : https://www.etsy.com/uk/shop/Tunnelbreeze  ... 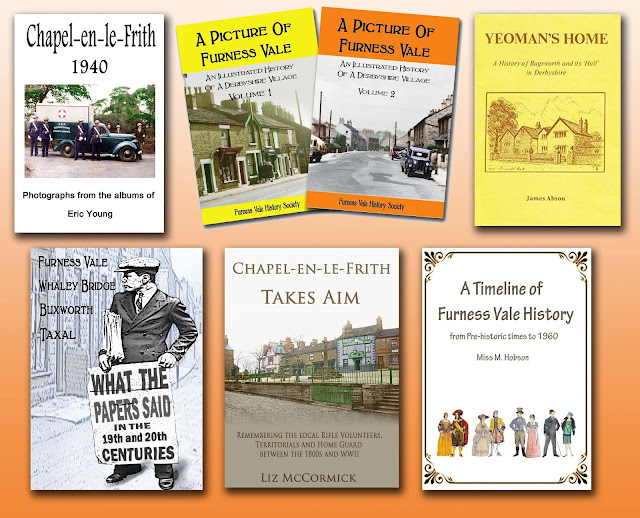